When we think about hemp products the first thought that comes to mind is marijuana, pot, hashish, ganja and many other words connected to drug consumption. But in fact, hemp is originally a harmless plant, that has been cultivated for 8000 years.

Finding its origin in Asia, hemp has been utilized for its fibers and seeds and has been widely cultivated through the 18th century in Europe. However, it has sorely decreased during the 19th century due to the apparition of other synthetic textiles and also due to its increasingingly bad reputation.

The hemp plant is a pretty strong plant, that requires very little

care and has a very important growth potential. It is used for all kinds of byproducts, such as building materials (extracted from fibers, outskirt stem and hemp shive which is the core stem), paper (from the fibers), rigging (from the fibers and the hemp shive), animal bedding (from hemp shive), oil for consumption (from the cold pressured hempseed), fuel (from the oil), essential oil (from the flower) and many other edible products coming from the seed.

Cannabis has been wrongly and broadly characterized in the past 100 years as marijuana, but there is a big difference between hemp and marijuana. Hemp has been grown globally for millenia

and contains a very low level (traces) of THC and a high level of Cannabidiol (both are Cannabinoid molecules), in the contrary of marijuana which is a cannabis cultivated exclusively for its high levels of THC. Furthermore, cannabidoil (« good » cannabinoid molecule) has been shown to block the effect of THC in the nervous system.

Cannabinoil has a widely positive effects on the body (anticonvulsant and anti-epileptic). Its beneficial properties are of the same order of magnitude of THC without the psychoactivity effects, giving cannabinoid a great pharmacological potential.

Cannabidoil molecules do not possess any psychoactivity unless they are decarboxylated. This process occurs, (spontaneously) with the addition of heat. Indeed, UV augment the THC in cannabidoil. Hemp grows in northern latitudes, in the contrary of marijuana which is cultivated around the equator or indoors under UV lights.

The seeds are harvested around mid-september and should 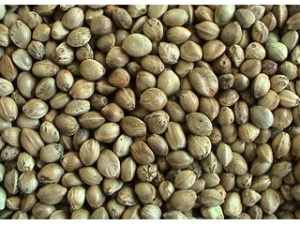 Hemp oil, which is extracted from the seeds, has an outstanding fatty acid spectrum and the proteins it contains are balanced and easily digestable. 90% of its fatty acids are unsaturated and are of an ideal ratio between omega 6 and 3 (3:1). Furthermore, the kind and the quality of the omega 3 found in Hemp oil is the same that is found almost exclusively in seafood. A supplementation of Linoleic Acid (omega 6) can be helpful to alleviate the deficiency that weakens the enzymatic activities that promote the conversion of Linoleic Acid to y-linolenic acid (omega 3) due to stress and diseases. Furthermore, Omega 3 has a inhibitor effect on cancer and tumor growth. It also lowers blood pressure, blood cholesterol levels, helps normalize fat metabolism and decreases insulin dependance in diabetics.

However, unlike virgin coconut oil, hemp oil is not made for cooking and frying. It would break down all the good benefits of the polyunsaturated fatty acids, even becoming potentialy bad for our health.

Hemp is the only plant source (beside quinoa) that contains the eight essential amino acids. A new alternative for vegetarian and vegan diet.

Hemp is rich in fibers as well as in minerals such as phosphorus, potassium, magnesium and iron. But it also contains a range of vitamins such as B1, B2, B6 and E.

In addition of the healthy properties of the ideal fatty acids and its incredible nutritional value, hemp contains a lot of compounds that increase its effectiveness as a functional food.

As we now understand, hemp is quite healthy and can easily fall into the superfood basket.

So in a nut shell, hemp plant is consumed mainly through its seeds. From those seeds a lot of final products are processed such as oil, flour, milk…

Thanks to its versatility, hemp is also utilized as a base for comestic products. Indeed, the rich source of polyunsaturated fat that is hemp oil is an excellent emollient and moisturizer. Furthermore, the vitamin E it contains is antioxydant and helps protecting the cells agains premature aging.

Hemp oil contains the compound called Methyl-Salicylate, which is a close relative of acetylsalicylic (aspirin). Its pharmacological effects are similar to those of aspirin, it reduces the risk of heart attack, strokes and cancer. Furthermore, cannabis is used in alternative medicine to help relieve and even heal the symptoms of diseases such as glaucoma, epilepsy, ADHD (Hyperactivity), Alzheimer’s disease and many more.

If you were sceptical about hemp plant before reading this article and you are still not convinced of its benefits, just remember that it has been cultivated and used for so long and for so many healthy purposes.

You just have to make the difference between hemp and marijuana, because one is the healthiest and most amazing source of various health benefits you can find on the planet and the other is an estranged cousin which is cultivated differently and for only one purpose : its psychoactive effects.

After coconut, you can now add a new ingredient on your grocery list called hemp seed. But stay tuned for new superfoods to discover in one of our next articles. You will always be surprised how much mother nature can offer you.

2. Hemp Seed : the most nutritionally complete food source in the world, Lynn Osburn, 08.1992

4. The composition of Hemp Seed oil and its potential as an important source of nutrition, by. C. Leizer, D. Ribnicky, A. Porlev, S. Dushenkov, I. Raskin, 2000